bG Gallery presents the latest body of work by artist Simone Gad, Fu Dogs on Black. Fu Dogs are Chinese guardian lions often seen at the entrance to buildings. Simone’s Fu Dogs have become more and more abstract reaching an apex for this current series appearing a expressive swirling paint. The paintings are accompanied by a striking new body of Fu Dog drawings. 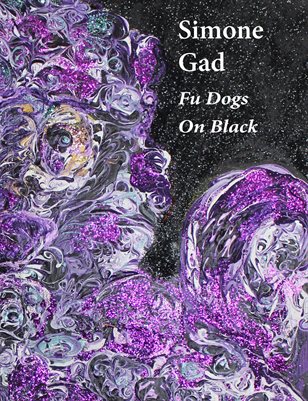 Preview/purchase via the link below.

After being introduced to the Fluxus movement in 1972 by Al Hansen, Gad began making collage and assemblage painting collages on vinyl. With these assemblage and collage works, along with painting and performance, Gad rose to prominence in the Los Angeles art scene throughout the 1970’s. An actress herself, Gad’s work focuses on Hollywood, exploring ideas of celebrity and stardom and providing unique insight into the world of fame, along with a not so flattering view of the soft white underbelly of Hollywood. Her career includes numerous exhibits throughout California and beyond, showing in Los Angeles at LAICA Downtown and Molly Barnes Gallery, among others. Gad is highly regarded in the Southern California art scene, being the recipient of numerous awards and grants, as well as being included in many publications and texts.