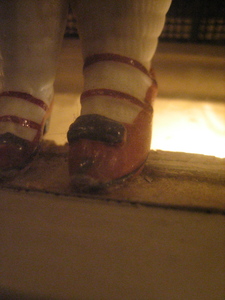 Silver Lake artist Lizzy Waronker practices a forgotten art called Assemblage.  Waronker, who holds a BA in Filmmaking from Macalester College, studied the process of a assemblage locally at UCLA under Dominique Moody.  Drawing on childhood explorations in her family’s Rhode Island home, she injects an overwhelming amount of detail into her assembled worlds.

Waronker specializes in exploring mythologies – often in miniature – and postmodern reclaiming. She injects a surprising amount of detail into her three-dimensional worlds and cross sections.  She has confronted scales large and small in her exhibitions, often placing Lilliputian sculptures in over-sized environment installations. She summons personal, as well as cultural, experience to conjure Gothic American tapestries of chaotic yet cohesive folklore.  She is self-taught, finding inspiration in nature, the detritus of others, and decomposition caused by neglect and time.