Exhibit runs through the first week of October

bG gallery presents Eros, a new body of work by artist Jack Reilly. In response to the growing tide of abhorrence in the current political climate, Reilly sought to create a series of work about love. For this new series Reilly uses postmodern exploration and shaped canvas to create a series of works exploring love narratives and traditional love myths, reinterpreted in contemporary context. 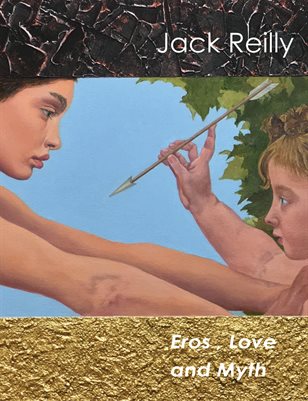 “We live in a fractured world of diametrically opposed viewpoints, cultural mores, and political ideologies. My new “Love and Myth” series defies the current proliferation of negativity and hatred, through depicting aspects of both representational and abstract beauty, coexisting within a shared visual context.”

The series is a cross-pollination of imagery, materials, and methods that simultaneously explore the juxtaposition of narrative subject matter and formal abstraction. The figurative portion of each piece, rendered in a traditional classical modality, is based upon historical and mythological ideas that depict aspects of beauty and love in their numerous manifestations. The abstract sections consist of a mixed media, process-based approach, that when juxtaposed alongside the figurative panels, ultimately take on the role of a sort of frame for the latter. One of the artist’s goals for this body of work was to reappraise and comment on the evolving intersection of historical and contemporary painting.

Jack Reilly is known for blurring the lines between sculpture and painting, coming to prominence in the 1970s. In 1979, the Molly Barnes Gallery on La Cienega presented a solo exhibition of Reilly’s abstract paintings. These new shaped canvases were met with critical acclaim by the Los Angeles Times, Artweek, and Arts Magazine. That same year, Reilly received a National Endowment for the Arts Grant. Reilly’s paintings were included in the collections of such notables as Fred and Marcia Weisman, Steve Martin, and Daniel Melnick.