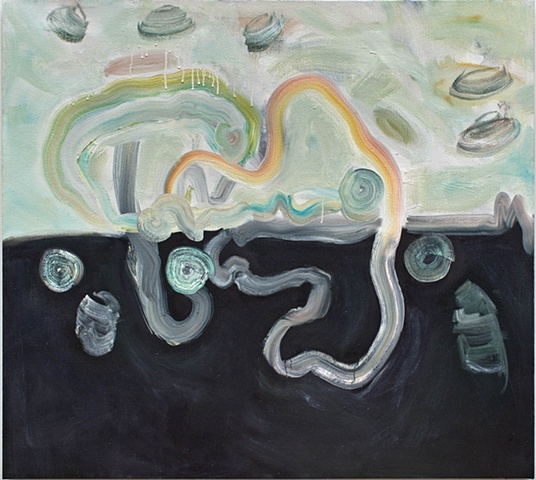 A practicing psychoanalyst, Schwartz’s work has often been described as tapping into a deep part of the psyche, though she refrains from analyzing her own work. Her 2011 exhibit at Bleicher Gallery was highly critically acclaimed and she continues to garner attention from the press, including a feature in New American Paintings.

“I returned to art after more than a decade of working as a psychoanalyst.  While my work as an analyst involves words as the medium for communication rather than paint, color, and texture, I have found the two fields to be complimentary as both share an intent to strip away outer, intellectual, defensive layers and find some essential inner meaning. My aim in these paintings was that the inner, emotional world of my subjects– their subjective world– be revealed in the color, texture, and mark-making themselves.”

Early figurative work seemed to go in two directions: more sensual, fleshy nudes and the shadow shapes that have been a repeating image over the years. These figures are stripped down, distilled, and abstracted, either in motion or silhouetted shadow figures. There have also been the bare subjects series, which attempted to crystallize states of being in more than fifty abstract portraits, using acrylic, oil, gauze, wax, and marble dust. My aim in these paintings was that the inner, emotional world of my subjects– their subjective world– be revealed in the color, texture, and mark-making themselves.

Recent work includes the new anatomy, nudes inspired by the writings of John Updike, including work on canvas with text written into the paint and paintings done directly onto book pages, and the bones, clocks, and ladders, abstract figurative paintings addressing time and loss.

Go Back to the Artists’ page